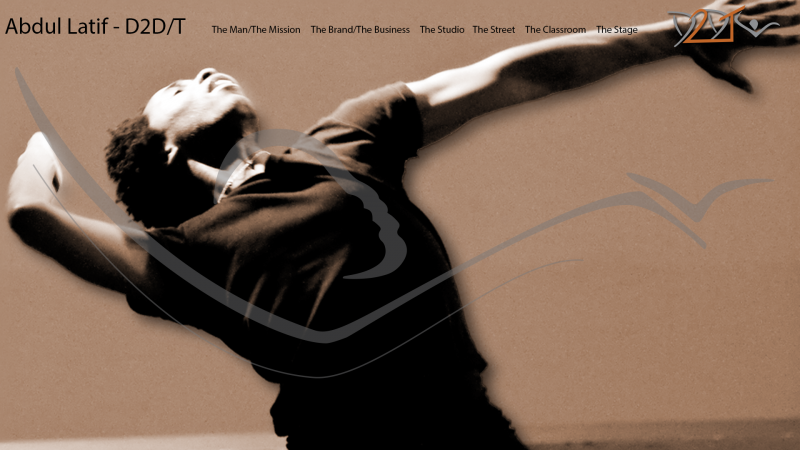 Producing Artistic Director – Abdul Latif sought to develop a new paradigm design with this launch of a Commercial Projects and Fine-Arts Management Group, AL~D2D/T (Abdul Latif ~D-Squared Dance/Theater). Rather than unveil a typically expected dance company structure after his Rockefeller Brothers Fellowship and Lincoln Center Residency, the objective of this Mgmt. Group is focused towards an intention of exploring, preserving, and celebrating an urban essence and contemporary culture through dance and the development of commercial-entertainment and fine-arts projects. We come into creation through the actual joining of bodies in a rhythm. We come to be realized as an actuality through the beating of that rhythm living within us. We are born by way of that which comes in the forms of congealing and contracting rhythms that thrust us out and into this world amongst a myriad of existing rhythms…. An aim of AL~D2D/T is to facilitate a significant and respected place in the cultural landscapes and dance community on the artistic periphery of the concert-dance world and creatively on the outskirts of the fine arts communities. Spearheaded by Producing Artistic Director Abdul Latif, AL~D2D/T began to uniquely position itself to embrace the challenges of forging a role in this next generation of producing creatively curated artistic exhibitions. On a principle that the arts are for everyone and that dance in particular is born out of the movements, rhythms and exchanges of everyday life, an artistic inner-city lens and creative contemporary point of view has grounded the work of this Mgmt. Group envisioned by Abdul Latif. The creed of AL~D2D/T is rooted in an aesthetic of the day and style for this time being linked to the foundation of Abdul's Urban-Contemporary Initiative (UCI), an initiative focused through an inner-city lens of the fine-arts. Described as an intersection of curbside/chic and street/sleek style of art, AL~D2D/T provides a porthole into the merge of where the street and studio essentially meet.

A penchant for the classic and a nod to the cool, AL~D2D/T (Abdul Latif~D-Squared Dance/Theater) champions new and inherent aesthetics, committed to inspiring creative analysis and connective reflection for audiences of all ages.  AL~D2D/T opens the door to the studio and in presenting live stage works, facilitates a reference to the streets that educates, engages and entices audiences to expand their view of and participation in the arts beyond what has been known and is expected currently. Through the last years of development Abdul Latif has built an aspirational creative model off of three multidisciplinary artistic theories developed over his last years of applied study: The Choreographic Rhythm Premise Theory; The Pedestrian | Performer Prism Theory and The Urban-Contemporary Palette Theory. As a focus of Abdul Latif’s these multidisciplinary theories are highlighting an assertion that internal curiosity is what initiates creativity. The combined thoughts on how to continue pioneering new ways to connect a common thread that cultivates conditions which allow a capability for the common viewer to construct their own conceptualized understanding of art, commences a progressive application of these theories. This progressive application of these theories shape a development of Abdul Latif’s D2D/T Method. The development of that Method and presentation of multidisciplinary and culturally specific art advances the dance-arts, arts-education and multimedia/video works created by AL~D2D/T, thus enabling an extensive study of the field and as well equally advancing the field.