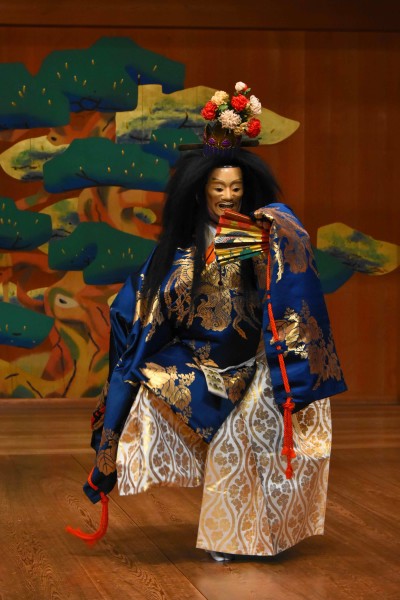 Japan Society presents an evening of traditional Japanese performance, Taiten: Noh & Kyogen.  Rarely performed in the last century, Taiten is a modern noh play that was created to celebrate the Taisho Emperor’s enthronement in 1912.  In recognition of the arrival of the Reiwa era under Emperor Naruhito (the 126th Emperor), Kurouemon Katayama X, a renowned noh actor and scion of the Kyoto Kanze Association, remounts this historic noh play.  Per tradition, the noh play is paired with a comedic kyogen piece.  Noritoshi Yamamoto from the prestigious Yamamoto Tojiro Family from Tokyo performs Kagyu (The Snail), one of the most popular pieces from the traditional kyogen repertoire.

Even as the noh play Taiten was first performed over 100 years ago, it is still classified as a “modern” noh play.  The story is about the god Amatsukami (Kurouemon Katayama X), who descends from the heavens for the emperor’s inauguration ceremony to perform a ritual dance to bless the new era.  As this piece was specially created to celebrate the transition of the throne, it has only been performed a few times in the past.  This rare live performance arrives in New York coinciding with one of the most important imperial succession rites, the Daijosai, taking place at the Imperial Palace in Tokyo on November 14 and 15.  Also known as the Great Thanksgiving Ceremony, this highly symbolic and important event features the new emperor offering freshly harvested rice to his past imperial ancestors and the gods.  In accordance, this program brings a climatic and auspicious close to Japan Society’s thematic fall Emperor Series in celebration of Emperor Naruhito’s ascension to the Chrysanthemum Throne.