The Band at the End of the World 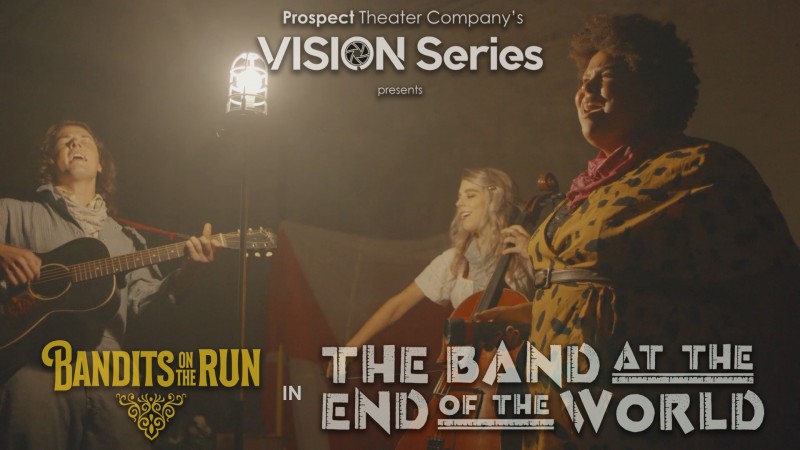 WHAT:  In a post-apocalyptic world, three musicians discover an abandoned theater and strive to re-connect with humanity.  Prospect Theater Company’s VISION Series, a music-theater-on-film initiative, kicks off its fall season with THE BAND AT THE END OF THE WORLD, an original musical short film written and performed by Brooklyn-based trio Bandits on the Run.  Directed by SRA?A, with Cinematography & Editing by Bart Cortright.

Prospect’s VISION Series is a new initiative launched in 2020, to continue the company’s mission of creating and presenting original musical theater works by emerging artists.

Through the VISION Series, Prospect provides paid opportunities for artists to create new work by commissioning, producing, and presenting short-form original musical theater performances on film.  These ultra-small-cast projects embrace a variety of visual and musical styles and stories, striving to capture the humanity of live theatrical performance through innovative cinematic approaches.

VISION Series film projects are openly accessible for online viewing and are closed captioned.  Films are funded through donations and grants, and will be presented for free streaming via Prospect's website, YouTube Channel, and other free platforms.

The initial four VISION Series projects were filmed on location at, and with the support of, the Goodwill Theatrelocated in Johnson City, New York, where Prospect artists were in residence during September 2020.  The Goodwill's historic theater venue (built in 1920) provided a spacious and stunning sound stage location for socially-distanced filming.  Prospect’s Health and Safety partner was United Health Services.

This initiative is made possible with leadership project support from Leonard Majzlin & Somerled Arts, and through the generosity of many other individual donors.