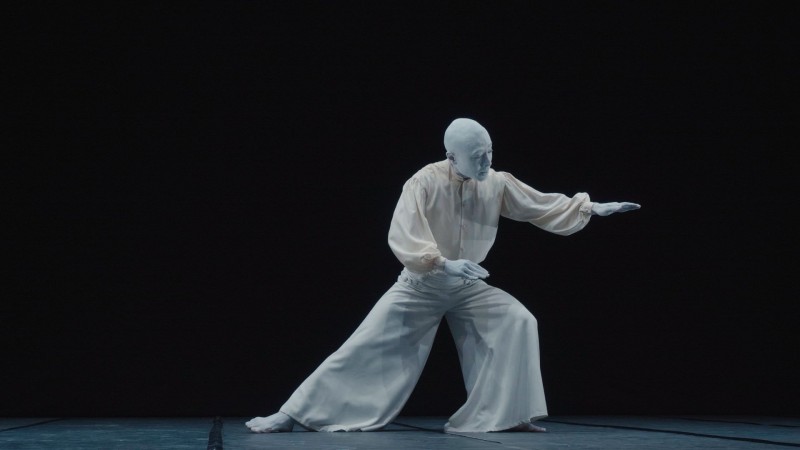 In memory of Yoshito Ohno, Vangeline Theater and New York Butoh Institute in collaboration with Triskelion Arts present Dai Matsuoka in Hijikata's Three Chapters Directed by Yoshito Ohno on Wednesday, March 25, 2020 and Thursday, March 26, 2020 at 8pm at Triskelion Arts, 106 Calyer Street, Brooklyn, NY. Tickets are $18, and can be purchased by phone at (212) 254-1109 or online at https://www.eventbrite.com/e/triskelion-arts-vangeline-theater-the-new-york-butoh-institute-present-hijikatas-three-chapters-tickets-86947144249.

a??a??i?sa??a??a?? Hijikata's Three Chapters has been performed by Yoshito Ohno, since the founder of Butoh Tatsumi Hijikata choreographed this piece for him in 1985. In 2018, being interested in diving into early Butoh methods, but also for archival purposes, Dai Matsuoka asked Yoshito Ohno to set the choreography on him and direct him in this new version. Through this piece, Matsuoka, one of the principal dancers of the renowned Butoh troupe Sankai Juku realizes a timeless collaboration with the founder of Butoh and Yoshito Ohno. With this performance, we remember Yoshito Ohno, who recently passed on January 8, 2020.

A revival of a piece choreographed by the founder of Butoh Tatsumi Hijikata.

Dai Matsuoka is a Butoh Dancer and the Artistic Director of LAND FES. He has been a principal dancer with SANKAI JUKU since 2005 and has danced in twelve Sankai Juku pieces including Kinkan Shonen, Tobari, Meguri, and Unetsu. Dai Matsuoka is also in collaboration with puppet company Phantom Limb (NYC) and a member of The Dance Archive Network dedicated to the preservation of Butoh legend Yoshito Ohno's digital motion data.

VANGELINE THEATER/ NEW YORK BUTOH INSTITUTE aims to preserve the legacy and integrity of Japanese Butoh while carrying the art form well into the future. The unique art of Butoh originated in post-World War II Japan as a reaction to the loss of identity caused by the westernization of Japanese culture, as well as a realization that ancient Japanese performing traditions no longer spoke to a contemporary audience. The Vangeline Theater is home to the New York Butoh Institute,dedicated to the advancement of Butoh in the 21st century. www.vangeline.com

Vangeline (curator) is a teacher, dancer, and choreographer specializing in the Japanese postwar avant-garde movement form Butoh. She is the artistic director of the Vangeline Theater (New York), a dance company firmly rooted in the tradition of Japanese Butoh while carrying it into the 21st century, and the founder of the New York Butoh Institute. Vangeline is a 2018 NYFA/ NYSCA Artist Fellow in Choreography. She is also the winner of the 2015 Gibney Dance's Beth Silverman-Yam Social Action Award. She is the author of a forthcoming book about butoh and looks forward to curating the third New York Butoh Institute Festival this October.

This program is supported, in part, by public funds from the New York City Department of Cultural Affairs in partnership with the City Council.