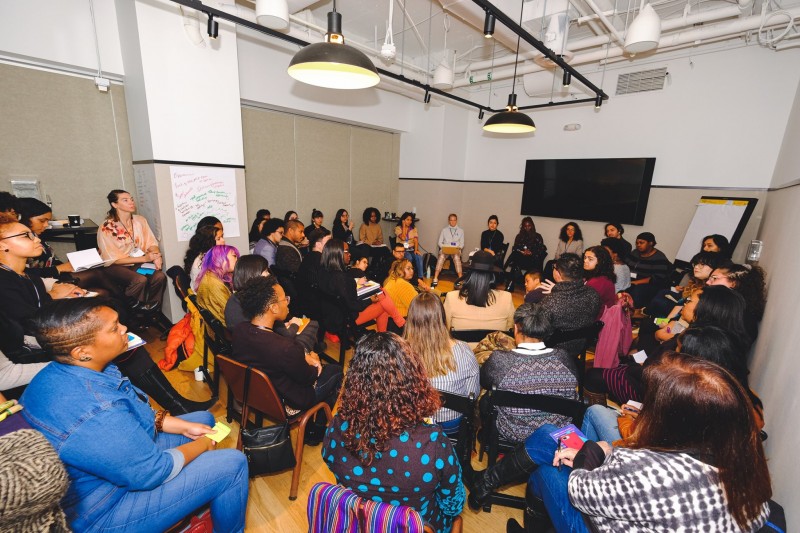 Back in November, JComm members were invited to the Arts Administrators of Color Network Annual Convening in Washington, DC to facilitate a conversation on race and language. Organized by the Arts Administrator of Color Network, the convening brought together leaders of color from all over the U.S. The event was thoughtfully curated, from the POC-lead event space and vendors to the incredible lineup of speakers and packed agenda.

We asked a few JComm members that attended the event to share their reactions and feedback:

“AACN was one of the first times in my life where I was able to listen to and share stories that strongly resonated with me. Being in a room full of passionate, strong, and thoughtful POC arts leaders was truly a fantastic experience.”

“My experience at the Arts Administrators of Color Network was by far, the most impactful gathering experience I have had in the arts world. AACN has built and supported an incredible container for administrators to question, collaborate, and celebrate the spaces we hold in arts and culture organizations across the country. I was able to network with administrators who run similar programs, engage in intergenerational conversations about confronting racism within the workspace and learn from administrators outside my field and local community. I applaud the organizers and look forward to next year’s convening!”

Facilitated by Brittany Wilson and Nadia Khayrallah, and archived by Kelsey Kramer, Behind the Label: Words We Use to Talk About Race was an open conversation inviting attendees to consider the various terms used to discuss race, as well as the underlying assumptions behind these words.

Our Conversation and Its Beginnings:

Sparked by discussions on race and language within JComm, we facilitated a long-table conversation alongside Charmian Wells, Shiyam Galyon, and J. Bouey at Dance/NYC’s 2019 Symposium. As we continued this dialogue at the AACN Convening, we invited attendees to share their own knowledge, opinions, experiences, and feelings surrounding different race-related terms, and to fill in gaps in their own understanding of race (and the words surrounding it).

We did not expect individuals to speak on behalf of any group they belong to. While we hoped attendees would reconsider the terminology they use to discuss marginalized racial groups in their organizations, the goal was not to agree on a single unproblematic term. Rather, our hope was to use terminology--and its failings--as a starting point to acknowledge the people, histories, and complexities often excluded from discussions of race in the arts field.

We began the session with a reflective exercise--inviting participants to write down terms for race and ethnicity that they identify with, choose not to identify with, or have questions about--before beginning our guided discussion. We synthesized our notes below with key themes from the session.

We asked participants for commonly used words or phrases they wish to avoid. Responses included race and class coded terms used to label students, such as “at risk,” “troubled youth,” and “FARMS” (which stands for free and reduced-price meal, but also associates children with animals). The term “underrepresented” was also critiqued as a vague and euphemistic way to reference racial groups.

There was widespread objection to the outdated term “Oriental” still being used. Some also expressed caution over the terms “Asian,” “Asian-American,” or “Asian / Pacific Isander” lumping together a broad swath of cultures, though others still strongly identified with these umbrella terms.

One participant brought critical attention to the “American” portion of hyphenated-American identities--after all, America includes two continents, not just the United States.

Not Quite Interchangeable: Black vs African American:

Brittany asked those who might identify as Black or African American why they prefer one or another.

Some used both terms interchangeably. Some, specifically women, felt that Black made space for their multifaceted ancestries--which included immigrants as well as people enslaved in this country--in a way that African American did not. It also instilled in them a sense of Pride.

Some had qualms about identifying as African, without known ties to the continent. Some had qualms with identifying as American, given the oppressive history of this country. One participant explained why she embraces the term African American in celebration of the specific, rich culture created by descendents of enslaved people in the US.

Prompted by a question, participants clarified the origin and meaning of the term Latinx. They explained the recent move away from the term Hispanic, in its emphasis on the colonizing culture. Latinx, developed as a more gender-inclusive form of Latino/a, also has its controversies: for instance, it contains the “X” sound, not used in Spanish, and is mostly used within the US.

There was also discussion over the broadening use of the term Afro-Latinx and whether it should be used by those who may have African heritage, but are not visually perceived as Black. What was clear was the importance of identifying anti-blackness across cultures and distinguishing the racial experience of visibly Black people.

Many described experiences of racial ambiguity, whether due to their mixed background or because their ethnicity isn’t commonly recognized where they live.

It was noted that ambiguity can carry a certain level of safety from more direct racism. Yet many described feeling “not enough” of any one race or culture to truly belong. Frequently mentioned were struggles with the loaded question “Where are you (really) from?” or not finding an appropriate box on demographics forms.

Some mixed-race individuals described encountering different racial stereotypes depending on their context or behavior--for instance, being perceived as an Asian “model minority” when performing well at work, but an “angry Black person” when voicing concerns. Even Barack Obama, one participant noted, had parts of his identity as a mixed-race child of an immigrant overlooked, as most emphasized his status as the “first Black president.”

Some participants also discussed the ambiguities of naming a place of origin amid complex political histories. What does it really mean to use a nation-state as an ethnic identity, given histories of colonialism, racial mixing, or shifting borders in many of our countries of ancestry? Additionally, some described questions in identity stemming from a lack of access to family histories and lineage, creating a sense of ambiguity in their identities.

Is Self-Identification the Answer?

At the suggestion of one attendee, we had everyone mention how they identified racially or ethnically before speaking. Not only did it help contextualize their statements, but prioritizing self-identification also helped us respectfully describe people on their own terms.

In fact, many described a change in their racial self-identification over time, whether that involved embracing an aspect of their heritage they once rejected, understanding their place in a new country’s racial system, or acknowledging realities of how they were most often perceived. Beyond strictly ancestry and genetics, self-identification also tells us something about a person’s current world view.

One participant highlighted the particular importance of self-identification for Native American communities. Because the US government only legally recognizes a small minority of the active tribes within its borders, many tribes would be erased from history without self-identification.

Yet, we discussed how self identification doesn’t account for everything. Racism often targets people based on visual perception, not identity. Given the colorism present in most non-white communities, skin tone should not be overlooked. Additionally, as organizations move toward systems of self-identification, it is possible to identify with a group for clout or funding, without experiencing the full brunt of oppression associated with that group.

Given our place at a POC conference, our discussion focused on non-white identities. Yet we also noted the necessity of naming whiteness, white culture, and white institutions to destabilize their assumed default position.

We also discussed unpacking “whiteness” as a concept--the way in which individual European ethnicities were homogenized to construct an illusion of neutrality and supremacy. We considered whether acknowledging their European ethnic origins might be a way for people to depart from this illusion--or whether this could be a convenient way to ignore white privilege.

Our intention was to create a container in which rich, multifaceted, and uncomfortable racial experiences could be expressed--however, it was people in the room who created the fruitful discussion. While we wish we had more time to unpack the topics that emerged, our hope is that participants left having learned from one another and ready to continue the conversation within their communities.

If you are interested in sharing any resources, you can email [email protected]! We will add them to the resources gathered from our previous session at Dance/NYC’s Symposium: 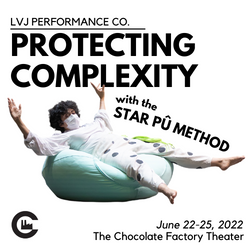