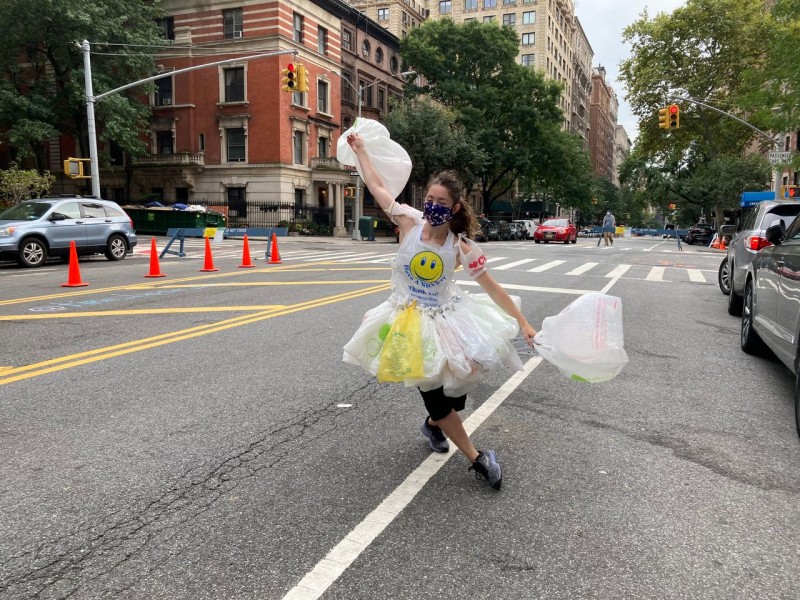 Jody Sperling/Time Lapse Dance (TLD) is thrilled to partner with The American Society of Landscape Architects, New York Chapter (ASLA/NY), Streetopia UWS, and Manhattan Community Board 7 to present WE WALK: Streets For Connection, a demonstration of community and culture in action on the Open Street on West End Avenue between 88th and 93rd Streets. The occasion is PARK(ing) Day, an annual international event where artists, residents, and activists temporarily transform curbside parking spots into public spaces. For the past two years, TLD has produced "Spot for Dance" festivals in curbside parking spaces. This year, the company and a diverse group of partners transform not only the parking spaces, but several blocks of West End Avenue for socially-distant activations including dance and music performances, a temporary parklet, chalk-art, tai chi lessons, mask-making, streetscape visioning projects, and civic engagements.

For the occasion, TLD presents excerpts of Plastic Harvest, a new dance work choreographed by Jody Sperling and themed around plastic pollution on West End Avenue between 91st and 92nd Streets. In costumes fashioned from plastic bags, each of the dancers inhabits a world of her own creation. One dancer takes a bath in a hundred plastic bags filling a large cardboard tub. Another, glides in a plastic-bag kimono enacting a transformative ritual. The dancers also take turns scootering around the avenue, serving up fantastical plastic antics. Cellist N. Scott Johnson accompanies. Dancers are Anika Hunter, Maki Kitahara, Andrea Pugliese-Trager, and Jody Sperling. Plastic Harvest will culminate in a dance film to be released later this fall. WE Walk, further provides the opportunity for a new collaboration between TLD's dancers and musicians from The Metropolitan Orchestra. A string quartet will play folk dance-inspired repertory as the dancers improvise to activate the streetscape. Other WE Walk events include an improvisation from jill sigman/thinkdance about reclaiming outdoor space and socially-distanced Tai Chi EasyTM /Qigong lessons provided by Good Energy Wellness & Movement. Activities and stations will be dispersed to allow for safe physical distancing but will be connected with a common goal of celebrating streets for people and communities. WE Walk aims to collectively envision new ways to adapt our street infrastructure and public spaces to promote health, vibrancy, and equity. Public health and safety is central to the mission of WE Walk. As such, mask-wearing and social-distancing will be required in order to participate.

Biographies
Jody Sperling is dancer-choreographer from NYC and the Founder/Artistic Director of Time Lapse Dance. She has created 45+ works including many furthering the legacy of modern dance pioneer Loie Fuller (1862-1928). Considered the preeminent Fuller stylist, Sperling has expanded the genre into the 21st century, deploying it in the context of contemporary and environmental performance forms. She was nominated for a 2017 World Choreography Award for her work on the French feature film "The Dancer" (premiere 2016 Cannes Film Festival) inspired by Fuller's life. Her work is also prominently featured in the forthcoming Fuller documentary "Obsessed with Light," directed by Sabine Krayenbuehl and Zeva Oelbaum. Years of working in Fuller's idiom, which involves kinesphere-expanding costumes, has influenced Sperling's awareness of the body's relationship with the larger environment. In 2014, she participated in a polar science mission to the Arctic as the first, and to date only, choreographer-in-residence aboard a US Coast Guard icebreaker. During the expedition, she danced on Arctic sea ice and made the short dance film Ice Floe, winner of a Creative Climate Award. Following that experience, Sperling has developed programs transporting the icescape to the stage and incorporating climate outreach. Current projects focus on creating visual-kinetic narratives merging choreography and climate science.

Time Lapse Dance (TLD) is an all-women 501(c)3 dance company founded by Jody Sperling in 2000. The company's mission is to forge dynamic connections between dance and movements in culture, history, science, the visual arts, and music. The work aims to investigate the relationship of the moving body to the world we inhabit through live performance, educational programs, and media production. TLD has two special priorities. First, cultivating climate literacy through the performance of new choreography (for stage, screen or street) that echoes the natural world, and the programming of outreach that merges concepts and communication strategies from scientific and artistic practices. Second, advancing the legacy of Loie Fuller by reimagining the art of performance technologist Loie Fuller (1862-1928) in an innovative and environmental context through the creation of new performance, media, research, and publications, that resonate with the 21st century public. Since inception, TLD has presented 16 seasons in Sperling's native NYC and toured to performing arts centers nationally and internationally. Along with performances, TLD offers outreach on arts/climate, family programs, workshops, and masterclasses. TLD has received commissions from Marlboro College/Vermont Performance Lab, University of Wyoming/NEA American Masterpieces, and the Streb Lab for Action Mechanics.