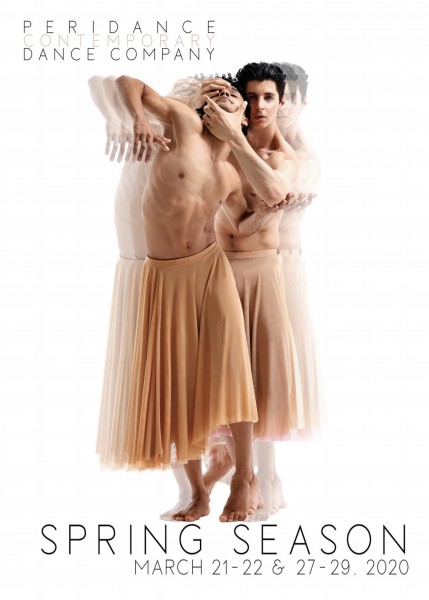 Peridance Contemporary Dance Company is back for their annual New York Spring Season at the Salvatore Capezio Theater. The Company is thrilled to present three innovative works throughout the weekends of March 21st-March 22nd and March 27th-29th. This diverse program features works from three distinguished choreographers including Artistic Director Igal Perry, Yin Yue, and Dwight Rhoden.

Dance with PCDC! Sunday, March 29th from 2:30-3:30pm at Peridance Capezio Center. Take a master class with Artistic Director Igal Perry and the dancers of PCDC prior to the show. Community members are invited to either dance or observe. Ticket includes performance and Q & A session. (Tickets $20)

Artistic Director Igal Perry will be presenting a new creation for the Spring Season as well as a restaging of Twilight. Twilight was originally created in 2005 for the dancers in Joffery II.  Classical in style, Perry’s Twilight juxtaposes more traditional lines with partnering sequences that venture into a realm of deep, expansive contemporary movement. Dancing to Chopin’s “Nocturne in E flat major”, the six dancers embody energy from romantic, soft, and sustained to unexpected, sharp and fast paced.

Yin Yue’s Just Above the Surface (world premiere) was created as part of a residency program at Western Michigan University with Peridance Contemporary Dance Company. The piece explores the electric connection between people through interaction--the sensations that pull people together or apart. The work is conceptually rooted in her movement without adhering to a traditional narrative. Each of the dancers tells their own story through the execution of the movement. Underneath each of the dancers’ individual journeys is a buzzing, musical current that carries the emotion and intention of the work into a heavy and thick mood.

Evermore was originally created for PCDC in 2013 by Complexions Contemporary Ballet choreographer and co-artistic director Dwight Rhoden. Evermore showcases Rhoden’s athletic and virtuosic choreography on eight of PCDC’s magnetic dancers, all set to the music of the incomparable Nat King Cole. Flirting with a variety of styles from ballet to ballroom, Evermore fills the stage with vigor and joy.