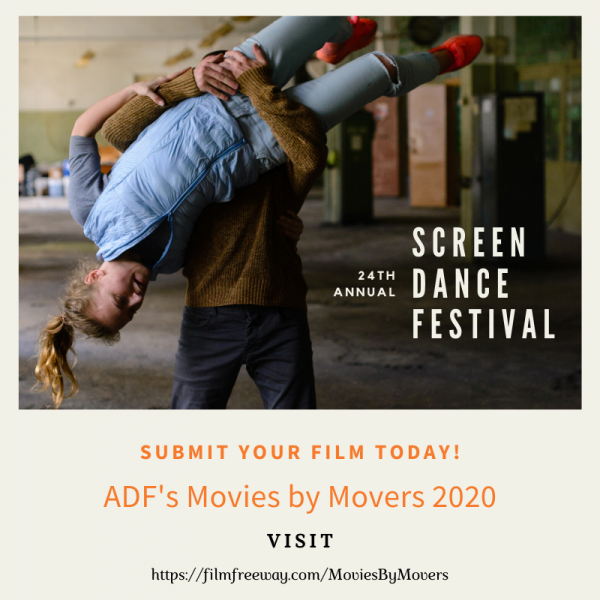 ADF's Movies by Movers invites short and feature length dance films for its annual festival which takes place during the American Dance Festival at the Nasher Museum of Contemporary Art in Durham, NC, and at Appalachian State University in Boone, NC in the fall. Screendance, experimental, documentary, and narrative films with strong presence of movement accepted! Go to https://filmfreeway.com/MoviesByMovers to submit.

A bit about ADF's Movies by Movers:

Moving images, moving bodies. Movement and film just go together. From the early experiments of artists like Loie Fuller and physical comedians like Charlie Chaplin, to the lush spectacle of the movie musicals of the 1930’s and 40’s starring dancer/choreographers like Bill Bojangles Robinson and Fred Astaire, to the avant garde movement with the likes of Maya Daren and Merce Cunningham, to Michael Jackson’s Thriller – moving bodies and the camera have shared an ongoing, dynamic conversation.

ADF's Movies By Movers is an annual festival dedicated to the celebration of the conversation between the body and the camera. We love sharing the history of the collaboration between the ephemeral art of live movement and the perpetual nature of film. And we love receiving new expressions of these forms from all over the world from artists like you. Students, emerging artists, seasoned professionals, even those who would not consider themselves “artists,” but have great ideas, find room on our screens to share their craft.