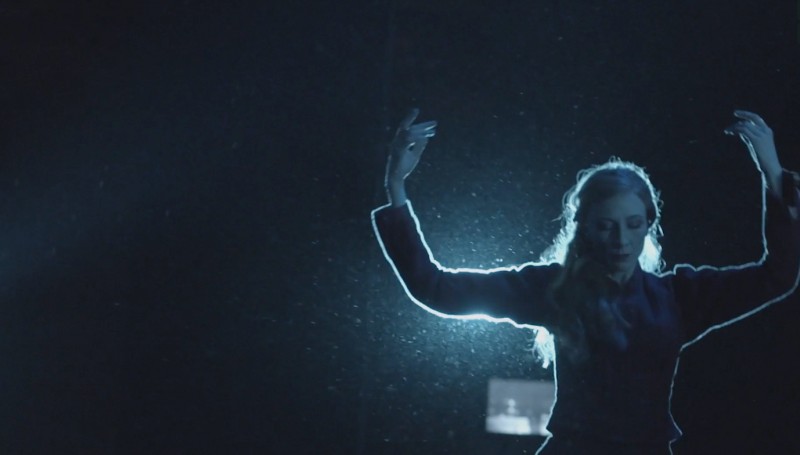 Contemporary dancer Alison Clancy’s awe-inspiring solo stormed the stage this spring at The Metropolitan Opera, a full immersion into Wagner’s epic oceanic overture of Der Fliegende Holländer. The performance featured heightened storytelling and astonishing 3D visuals. A highly anticipated string of performances opened at the Met on March 2nd. After the Covid pandemic's abrupt cancellation of her “Live from The Met" international cinema debut (as well as the rest of the NYC dates at historic Lincoln Center), a rehearsal taping of her last performance will premiere on PBS July 5, 2020 at noon, ET. (Check local listings.)

MORE:
On March 2, 2020 Alison Clancy “Made Dance History” (The Dance Enthusiast) performing an 11-minute dance solo at The Metropolitan Opera for the overture of Richard Wagner’s Der Fliegende Holländer. Directed by François Girard and choreographed by Carolyn Choa, Clancy took center stage as the psycho-spiritual embodiment of Senta, the opera’s leading lady.  Her barefoot solo, unprecedented for its length and gravity, was set against sweeping projections by Peter Flaherty and introduced the epic Gesamtkunstwerk of this new production. Clancy summoned a ghost ship and 3D holographic lightning storm and “was nothing short of breathtaking” according to Opera Wire. Clancy, a contemporary dancer who danced in the ensemble at The Met for a decade, achieved the title of Principal Dancer, a distinction usually reserved for guest stars from New York City Ballet or American Ballet Theater.

Alison Clancy is a unique and unpredictable instrument of creative catharsis. Crossing between the worlds of dance and music, her days often start with ballet class and end with an electric guitar. In pre-Covid times she could be spotted in concert dance performances, singing for experimental fashion shows, and acting in avant-garde films. Her Covid story however, echoes that of so many: anticipation and cancellation.

The March 14th performance of Holländer was to be filmed and broadcast live from The Met to over 2,200 international movie theaters. It was a culminating moment in Clancy’s career. Friends and family around the world had tickets to watch her on the silver screen. But  March 12, less than 48 hours before curtain, The Met went dark. The live filming and broadcast were cancelled.

Today artists across the world grieve cancelled performances and projects as the industry has come to a grinding halt. Over the past three months Clancy made peace with her loss. And yet, this week, a colleague informed Clancy The Met has cut together footage from a rehearsal filming of her final performance on March 10th. It will premiere July 5th on PBS at Noon, ET (simultaneously streaming on Apple TV, Thirteen WNET New York, Roku, Amazon Fire TV).

Clancy is thrilled her premiere solo will be shared with the world. Wagner’s Senta dreams of stopping the stars, changing fate, of being the one true love who can save Holländer from his curse. It’s a story of redemption through love. Clancy explains her portrayal of Senta was about more than Holländer himself. She aimed to embody the archetype of fiercely gentle feminine love: a woman dreaming of a poetic life and navigating her own contradictions: fragility/strength, restlessness/patience. “I was inspired by medieval maidens, anime warrior princesses, the Statue of Liberty, mystic dreamers… I searched for power in a kind of softness and vulnerability. It was an immense honor to originate this role with choreographer Carolyn Chao. When it all came together, I danced on a steep cliff to sweeping music played by one of the most amazing orchestras in the world and summoned a lightning storm with my fingertips. For those few distilled moments in time, I tried with all my heart to honor the alchemical possibilities.”

Audiences worldwide will now be able to see this groundbreaking performance.

ABOUT THE ARTIST:
Alison Clancy is a multidisciplinary artist working in pursuit of beauty and catharsis. She incorporates ritual practices and visual design into the forms of contemporary dance and music; using projections, lighting techniques, and a myriad of guitar and vocal pedals to create otherworldly highways, lost intersections where we search for ourselves in the shadows. Clancy’s been the front person for several bands including an all-girl-art-punk-band (HUFF THIS!)  and a duo with renowned cellist/composer Chris Lancaster (Loving You). She released her debut solo album Psycho Tyko to critical acclaim. In addition to dancing with The Metropolitan Opera she’s toured internationally with Zvi Dance for over a decade, and worked with Baz Luhrmann, Martha Clarke, Shen Wei, Ryan Heffington, Marco Evaristti, and The Flaming Lips. www.alisonclancy.com