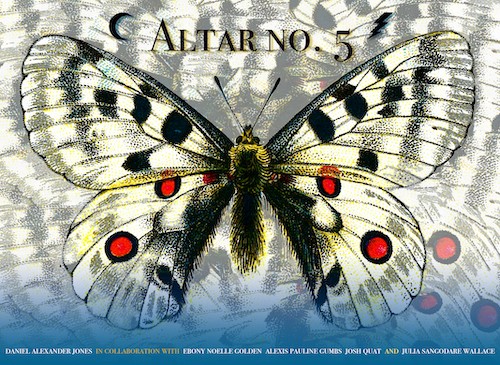 In the Spring of 1994, the late Rebecca Rice sat Daniel Alexander Jones down and gave him a tarot divination that struck like lightening and beckoned like the Moon. He never forgot it. Twenty-six years later, that reading forms the basis of a durational performance project begun by Jones in collaboration with Ebony Noelle Golden, Alexis Pauline Gumbs, Josh Quat, and Julia Sangodare Wallace. Jones and his collaborators employ assemblage, theatrical jazz, interdisciplinary and interdimensional practices in performance. With the intention of exploring multiple expressions for the work in our rapidly shifting world, the collective has determined an initial series of offerings for 2020. Join us on May 2nd as we share a “trailer” for the project, and a conversation that we hope will serve as an invitation to you to journey with us going forward. RSVP here.

a??Altar no. 5as?i?Z is a commissioned by New York Live Arts’s Live Feed Residency Program and The Public Theater.