Women of Color in the Arts Notes from the Underground: Tear them Down!

Women of Color in the Arts Notes from the Underground: Tear them Down!

By Kaisha Johnson, Women of Color in the Arts (WOCA)

Dance/NYC’s approach to increasing equity and inclusion in dance is grounded in collaboration. It has established partnerships with colleague arts service organizations, including Women of Color in the Arts (WOCA), that are mission-focused on increasing racial equity and/or meaningfully integrating disabled people into the arts and culture.

Toppling statues reminds me of that time when they “gave" me (I earned it) first chair in the orchestra. For them, it was a sign of progress. (I was the only Black violinist). For me, it was a symbol of tokenism. You see, while they acknowledged that diverse representation was needed in the orchestra, they did nothing to change the systems which had created an almost homogenous sea of White faces belting out Beethoven (a Black man, by the way). So while people are arguing over if statues should still be left standing, we’re still left with the institutions that put the statues there in the first place.

The arts field needs to make a change. Over the past few years, I’ve been involved with some well-meaning affinity groups looking to affect change in the field. They champion the idea, and legitimately, want to create a diverse, inclusive and equitable space for all. They fervently believe that the system is broken. But what they fail to fully see is that the systems in which we work aren’t actually defective. The systems function just as originally intended - to suppress the voices and movements of people of color. Thus, we get stuck in this cycle of analyzing an approach to solving these overwhelming issues within these solidly built systems of inequity. Just tear them down, I say!

In order to tear them down, I need to talk to you. You who may or may not understand your complicity in this whole system. You who loves to program a diverse roster of artists each year. You who pats yourself on the back when you are able to squeeze in a Muslim, a Native American, a queer woman, and an avant-garde Asian from a country which you can’t readily identify on a map, all in one season. You who prides yourself on securing the “hip” hip-hop violinists or that well-regarded African-American choreographer (whose work you don’t really understand) for your family programming or during Black History Month. But you who failed to recognize that most White artists aren’t relegated to being programmed only when attached to a school matinee or “community outreach.” Or that most White artists don’t need an "ethnic heritage" month in order to be considered viable candidates for the mainstage. If I had a dollar for every time I spoke to an arts organization about presenting a Latin American artist only to hear, “We’ve already got a Mariachi band for Hispanic Heritage Month, so...”, I’d probably own land in both Mexico and Hispaniola.

Tear them down. The institutions, not the statues. 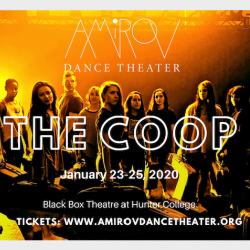