This event has already occurred. Please enjoy photos and event information below.

Accessibility: Wheelchair-accessible seating is available behind the last row of affixed seats. If you require reasonable accommodation please contact Karyn Treadwell at least two weeks prior to this event. 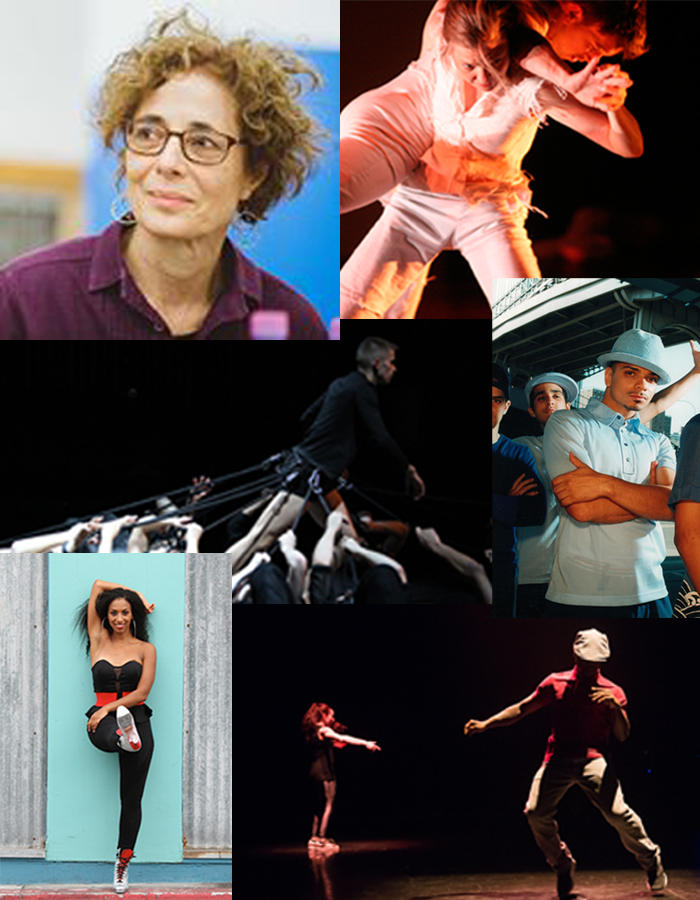 The second year of the CUNY Dance Initiative is under way, awarding 26 New York City dance companies/choreographers residencies at 11 CUNY colleges in 2015.  Funding from the New York Community Trust and the Mertz Gilmore Foundation opens the doors of CUNY campuses to local choreographers and dance companies, simultaneously supporting the growth of professional artists and CUNY students by assisting the host colleges with artist fees, rehearsal expenses, and marketing efforts. Join Dance/NYC as Wendy Perron, author of Through the Eyes of a Dancer and former editor in chief of Dance Magazine, hosts a discussion with five awarded artists at the LaGuardia Performing Arts Center in Long Island City.

Wendy Perron (moderator), author of Through the Eyes of a Dancer (Wesleyan University Press, 2013), had a 30-year career as a dancer/choreographer, teacher, and writer. She was a member of the Trisha Brown Dance Company in the 1970s and choreographed more than 40 works for her own company in the 1980s and ’90s. She has taught dance technique, composition, history, or writing at Bennington, Princeton, NYU, SUNY Purchase as well as at Gibney Dance. In the early ’90s she served as associate director of Jacob’s Pillow Dance Festival. In addition to contributing to the New York Times, the Village Voice, and Ballet Review, she was editor in chief of Dance Magazine from 2004 to 2013. In 2011 the New York Foundation for the Arts inducted her into the first round of its Hall of Fame. Perron now writes for Dance Europe as well as Dance Magazine, where she is currently editor at large. She also does guest teaching around the country and adjudicates at dance and choreography competitions. She writes almost constant commentary for her own website at www.wendyperron.com.

Chloé Arnold, along with her company, Syncopated Ladies, recently had sold-out concerts in both New York City and Washington, DC with rave reviews in The New York Times. As a leading lady in the Art Form of Tap, Arnold has wooed audiences in over 21 countries and 35 states. Her work can be seen on film, television, and stages worldwide.

Co-Founder and Co-Director of the DC Tap Festival, her career highlights include choreographing Macy’s 2014 Back to School National commercials, HBO’s The Comeback and a commercial for Canon, performing at Madison Square Garden for the opening of the NY Knicks 2013-2014 season, working with Beyoncé, recurring role as an Onyx Girl on HBO's Boardwalk Empire, performing on NBC's America's Got Talent, ABC’s Dancing With The Stars and FOX's So You Think You Can Dance, a sold-out NYC run of her One Woman Show at La MaMa, Global Fusion Concert in Dubai, Jacob’s Pillow Dance, Broadway Cares/Equity Fights Aids Easter Bonnet concert, numerous productions with the legendary Debbie Allen and performing at the star-studded gala hosted by Diddy and Debbie Allen at The Howard Theatre in Washington, DC.

Ephrat “Bounce” Asherie has trained in ballet and modern dance but found her artistic home in breaking, hip hop and house. She began breaking in 2002 under Richard Santiago (aka Break Easy) and soon after was introduced to house music. She has been greatly influenced by the New York club scene ever since. As artistic director of Ephrat Asherie Dance (EAD), her work has been presented at the Apollo Theater, the Ahmanson Theater, Jacob’s Pillow, New York Live Arts and Dixon Place, among others.  Asherie is a NYFA artist and has received various grants and awards to support her work including a Mondo Cane! commission from Dixon Place, a Swing Space and Workspace residency from the Lower Manhattan Cultural Council and a Travel and Study grant from the Jerome Foundation.

Asherie has performed and taught throughout the U.S. and Europe, as well as in Peru, South Africa and Israel. She has appeared on NBC, MTV, Comedy Central and at City Center, Carnegie Hall and Madison Square Garden.   She holds a B.A. in Italian language from Barnard College and is a MFA candidate at the University of Wisconsin: Milwaukee.  She is on faculty at Broadway Dance Center and the Joffrey Jazz and Contemporary Program and dances with her crew MAWU, a house dance collective.

Hip-Hop dancer/choreographer Gabriel “KWIKSTEP” Dionisio was born and raised in New York City.  At the age of eight Kwikstep watched the duo “Sheilds and Yarnell” on Soul Train and was inspired to dance. He began to pursue the techniques known as Poppin and Boogaloo.  When he attended local block parties in ’82, he joined his friends and slowly became well-rounded in all these street dance styles.  His first tour was with the “New York Express” around China at the age of 19, which took him on a twelve-city trip. By 1991 he had won the Bessie award for choreography.  Today he is best known for his versatility and for his signature headspins.

Dionisio has been in several dance companies such as Rhythm Technicians and GhettOriginal. He was featured in “Jam on the Groove”, Nike Culture Shock, and New Power Generation. He has done commercial work for Dr. Pepper, Levi’s, and a Spike Lee commercial for IAM.com. He recently appeared in The Daily Show with Jon Stewart. Will Smith called on him to represent the break dance aspect of the century in the millennium performance for Bill Clinton. Video work includes Missy Elliott, Mariah Carey, Will Smith, KRS-One, Lords of the Underground and Fabolous.  He traveled to Japan, across the United States and Europe and has worked for the US State Department as a cultural envoy.

He taught an influential Hip-Hop technique class at Broadway Dance Center to make students aware of the Hip-Hop lifestyle, and fundamental movement along with the history and the meaning behind the vibe. Kwikstep has offered Breakin’ classes with his unique format of instruction at the Beatriders Camp in Texas, NYU in Manhattan and The Door Community Center. He has judged dance contests such as The Battle of the Year in Germany and Red Bull’s BC ONE. He mentors students who desire to explore the possibilities of a career in performance art through Full Circle Productions, a nonprofit Hip-Hop collective he co-founded with his wife. He hopes to one day have his own school of urban arts and to produce a traveling production. His dream is to provide options to the teens of today who, like him, are presented with the challenges of street life as the only way to live.

Mike Esperanza (BARE Dance) was born in Manila, Philippines and raised in Southern California and has established himself as a sought after teacher and choreographer. With a BFA in graphic design from California State University, Fullerton, Esperanza's approach to visual construction has influenced a unique movement orchestration on stage described as "captivating visuals of impeccable lines and shapes" by Broadway World. His works have been commissioned by prestigious college and university dance programs including Chapman University, Loyola Marymount University, UNLV, Cal State Long Beach, Cal Poly San Luis Obispo, Utah Valley University, Shenandoah University and Grand Valley State University to name a few. In 2005, Esperanze was awarded the "Dance: Creation for Performance" grant presented by Dance/USA and the Irvine Foundation. With this distinguished award, BARE Dance Company began. He has also been a finalist at the Palm Desert Dance Under the Stars Choreography Festival in 2006, 2008, 2009 and 2010 taking second place in 2009 and winning the paid engagement award in 2010. In 2011 BARE was part of the "Innerstate" roster presented by ODC Theater and funded by the Irvine Foundation. The program allowed the company to tour California and present the Lester Horton nominated show Manhatttan. In 2014, Esperanza received the Steps Repertory Ensemble Commission award at the Reverb Dance Festival and became the recipient of the CUNY Dance Initiative grant creating a site specific work, VENOMOUS, for LaGuardia Performing Arts Center. He Currently teaches at Peridance, Steps on Broadway and serves as a guest teacher at Broadway Dance Center and EDGE Performing Arts. 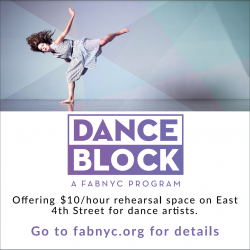