The Economic Activity of Dance in New York City 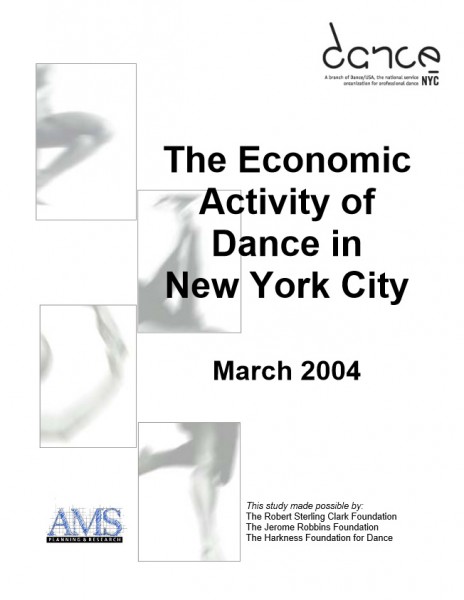 New York City is the dance capital of the world with more dancers,choreographers, dance companies, dance performances and audiences than anywhere else. After George Balanchine, working in ballet, and Martha Graham (expanding the work of those who came before) inventing a new form that would later be called modern dance, no dancer ever danced the same way again. Indeed, the roots of concert dance as performed in this and the prior century were formed here. This extraordinary legacy continues with new generations of dance artists in this city constantly exploring and creating new work that challenges and entertains and illuminates new perceptions of movement in time and space.

And yet, despite dance’s seminal role in our city’s and the world’s cultural life, there has been amazingly little analysis of dance in New York City - amazingly little quantification of just why New York City is the dance capital. The study you are about read represents a giant first step in understanding dance’s economic role in our city. With knowledge comes power, and with power comes influence, and with influence the dance capital of the world will remain so, and leap into a future richer with possibility and resources and promise.

Dance/NYC, and our parent organization, Dance/USA, the national service organization for professional dance, are proud to have taken this first giant step. Dance/NYC also wishes to thank the enlightened funders who immediately grasped the importance of this study and made it possible. Our thanks to Peggy Ayers and Darcy Hector of the Robert Sterling Clark Foundation, Christopher Pennington of the Jerome Robbins Foundation, and Ted Bartwink of the Harkness Foundation for Dance. Our thanks too, to the dance companies and presenters who took time from their endless workdays to complete the various surveys whose results you are about to read.

This important “Economic Activity Study of Dance in New York City” is yet another outstanding example of why Dance/NYC was established by
Dance/USA. Bearing in mind the symbiosis between this important local community and the national dance ecology, the results of this study will be distributed across the country to dance professionals and supporters, arts communities and policy-makers. We hope it will, by extension, help to raise the profile and value of dance nationwide as well as provide an example of what other dance and arts communities in other cities can accomplish by working collaboratively.

As Commissioner of the Department of Cultural Affairs, I want to congratulate Dance/NYC for producing this landmark report, "The Economic Activity of
Dance in New York City." This study is so valuable because it conveys the tremendous economic impact that the field of dance has on New York City. In doing so, it addresses a major challenge: how to quantify and position the cultural community as an essential economic sector in the City. Producing art is never primarily about the bottom line; success in this field isn't determined by profits or the uniformity of a product. Instead, artistic expression, in its myriad forms, connects to individuals in ways that cannot be reduced to spreadsheets. However, if the cultural field is to communicate its unique and essential influence on the City's growth and quality of life, then we must have the vision and courage to join forces as a sector and develop methodologies that quantify this influence. Building on past studies showing the integral relationship between culture and economic development, Dance/NYC has produced a milestone. It is up to all of us to support and advance these efforts in the years to come.

New York City is recognized as the world center for all forms of dance. From the prestigious companies that make their home here to the lofts and studios of emerging artists developing their craft; as the showcase for national and international companies and the laboratory where young people and new audiences are introduced to the creativity of dancers and choreographers; New York City is the dance capital of the world.

Dance/NYC, a branch of Dance/USA, the national service organization for professional dance, with support from The Robert Sterling Clark Foundation, The Harkness Foundation for Dance, and The Jerome Robbins Foundation, commissioned AMS Planning & Research Corp. to conduct the first-ever economic impact study of dance in New York City to document the significant role that NYC-based dance organizations play in the local economy. As this study is intended to present the impact of dance on New York City, activity by NYC-based dance organizations outside the city is beyond the focus of this study and while substantial, this activity is not included in the analysis in this report. Data for the study were gathered in 2002 and 2003 and included organizational and financial information provided by 41 New York City-based dance companies and dance presenters. In addition, AMS conducted audience surveys between August 2002 and January 2003 at 19 dance performances by 13 different companies at nine New York City dance venues of various seating capacities. This Executive Summary highlights findings from the information gathered through the two methodologies.

The full report, including appendices detailing the economic impact analysis prepared for AMS by Professor William Beyers of the University of Washington, detailed findings of the audience survey, and the organization survey protocol and findings, is available below: