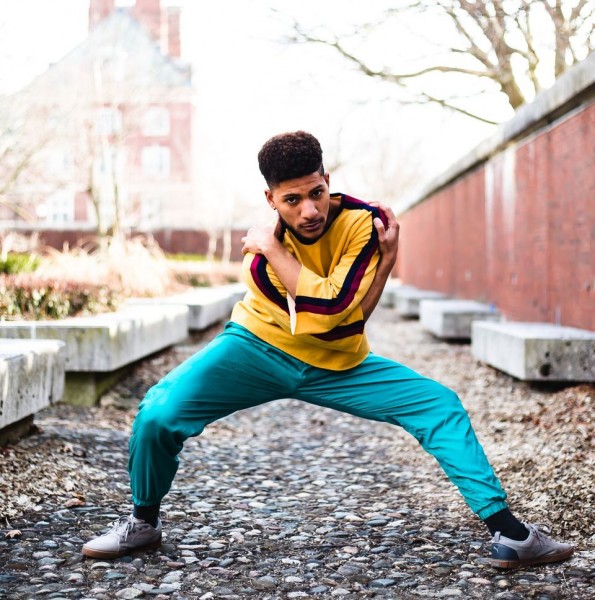 Battery Dance announces $1 virtual classes, continuing the tradition of offering "free" workshops as part of the Battery Dance Festival. There will be nine diverse workshops taught by choreographers from around the world over Zoom. The hour-long classes will run August 14-22, 2020, beginning at 10am EDT each day. Zoom links will be provided after registration. Reservation cost of $1 is non-refundable.

Javed Sanadi is an Indian choreographer who shot to fame after choreographing and performing on popular Indian Dance reality TV shows like Jhalak Dikhla Jaa and Dance India Dance. Today, he is one of the most recognized names in the Indian dance scene, best known for choreographing A-list celebrities like Amitabh Bachchan, Shahrukh Khan, Govinda among others. Javed will teach an open level Bollywood item as part of the Battery Dance Festival's annual India Independence Day celebration.

Hoedy Saad introduced Voguing as both culture and dance to the Lebanese dance and club scene. A self-taught dancer, choreographer and performer, the 25-year-old started voguing in 2013 and introduced the House ballroom scene to Beirut in 2017. He has since performed on some of the grandest stages from Beirut to Amsterdam, and has been featured in music videos as a dancer and choreographer. He survived the explosion in Beirut on August 5th and has been helping survivors in the days since. He will take a break to share his technique and artistry with Festival workshop participants live from Beirut.

The award-winning Dutch choreographer of

Sisters which is being screened in this year's festival, Emma Evelein shares her approach to designing movement that is connected to a story or a feeling and translated into film. Among the several aspects to be addressed: camera work, lighting, color, texture and dancers' skill. She will teach a phrase from

Sisters and explore how participants might translate it into their own style of movement direction.

Sponsored by Dutch Culture USA through

the Dutch Consulate in New York.

Kathryn Posin studied composition with Anna Sokolow, Merce Cunningham and Hanya Holm, and made her debut at the 92Y. Posin's works have been performed by her own company and internationally by Netherlands Dans Theater 1 & 2, Alvin Ailey American Dance Theater & Ailey 2, Eliot Feld Ballet, National Ballet of Bulgaria, Ballet Westamong others. With her assistant, Daniel White from Alvin Ailey, Posin will show how the quirks of contemporary dance and world dance can infuse ballet. After a warmup, the process of choreography will be explored.

Moving Into Dance. In 2016, he became the first African to win the prestigious Kurt Jooss International Award for Choreography for his work

Road. In 2019, his choreography won three awards at the 33rd International Competition for Choreographers in Hanover, Germany. Oscar will lead participants in his individualistic style of South African dance.

Allen Kaeja, a Canadian film director and choreographer, entered the field of dance after nine years of wrestling and judo. He has created over 90 dance pieces since 1981 and choreographed 26 films. A co-artistic director of Toronto-based Kaeja d'Dance, Kaeja co-founded the CanAsian International Dance Festival. Allen will lead workshop participants in his multi-faceted style of improvisation.

hi are you like me won the Grand Prize at the 2019 McCallum Theater Choreography Festival. Her choreography has been presented at Alvin Ailey City Theater, LaGuardia Performing Arts Center and Actor's Fund, and at numerous festivals. She has worked with renowned artists such as Robert Moses and Kate Hutter. Dolly's workshop will explore various aspects of participants' creative processes leading into movement.

The Battery Dance Festival brings together 52 filmed performances including 28 premieres from 19 countries. Themed evenings include World and U.S. film Premieres from the Middle East, Africa, Europe, Japan and North America.  The centennial of the ratification of the 19th Amendment, which recognized women's right to vote, serves as a focus for a program by women choreographers.

Works that focus on Black voices in dance, the resiliency of New York City and the Festival itself and a special program celebrating India's Independence Day round out the Festival.

Established in 1982, the Battery Dance Festival (BDF) represents New York City's longest-running free public dance festival and one of its most wide-ranging.  Its annual live audience of over 12,000 will be multiplied many times over with the ability to attract viewers from the entire world this year.

"Constricted by the pandemic and uncertainties over how to safeguard both performers and audience members, we've decided to go virtual in our 39th year.  In doing so, our curators have discovered a wealth of beautiful material on film, most of which has never been seen before by our audience. So let's celebrate silver linings and look forward to nine nights of rare and inspiring dance across a world of genres," said Battery Dance founder and Artistic Director Jonathan Hollander.

Support for the 2020 Battery Dance Festival

As one of America's leading cultural ambassadors, Battery Dance connects the world through dance. It created its outdoor festival in 1982 in lower Manhattan, the community where it was founded in 1976. The Company pursues artistic excellence and social relevance by creating vibrant new works, performing on the world's stages, presenting dance in public spaces, serving the field of dance and teaching people of all ages with special attention to those disadvantaged and living in areas of conflict. Battery Dance is committed to enhancing the cultural vibrancy of its home community in New York City, extending programming throughout the U.S., and building bridges worldwide through international cultural exchange with programs in 70 countries to date.  Faced with the curtailment of all of its live programs in March, the Company went online and invented Battery Dance TVwith hundreds of classes, performances and interviews broadcast across 171 countries, achieving over half a million views within just eighteen weeks.  www.batterydance.org