Melding Art and Activism: An interview with Gwen Shockey 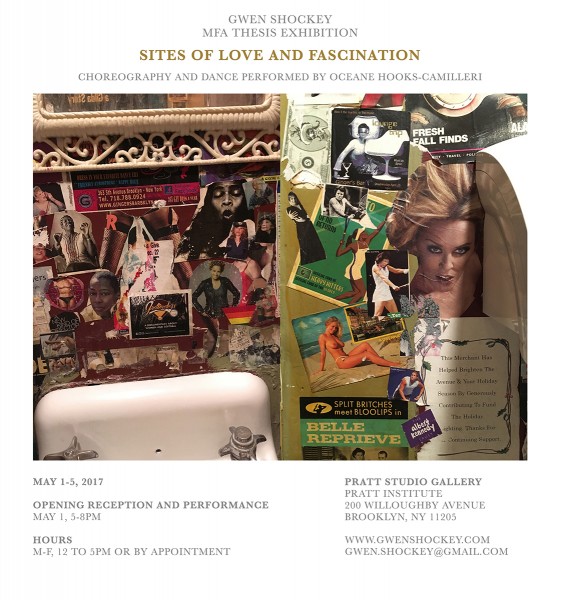 The following is an interview inquiry examining these ideas. I was curious to speak to visual artist Gwen Shockey, with whom I am collaborating on a project which premieres in May. Gwen is a visual artist whose work has included drawing, embroidery and, more recently, multimedia installations. Much of her work examines queer culture, but is it consciously political and/or activist?

I want to begin this conversation with a couple of key definitions:

Political: relating to the government or the public affairs of a country.

Activist: a person who campaigns to bring about political or social change.

OHC: Do you see your current work as political based on this definition?

GS: I think it is impossible to not read the work I am making currently as political. This is especially true following the election of Trump in November and the new administration’s shift away from federally sanctioned protections for the LGBTQ community relating to hate crime prevention, housing rights, safety in the workplace and in public bathrooms, to name just a few issues. I have been doing a lot of reading lately about the history of the Gay Rights Movement and the ways in which different administrations affected its progress in the United States. We are in an era that harkens back to politics in the 1950s[CU1] —one of the most dangerous times in history to be a non-white, non-heterosexual person. Gay and lesbian bars (and other community gathering spaces) were vital in the forming of a resistance movement and in the survival of individuals who were shunned from their families, fired from their jobs and harassed in public. There has been so much talk about “safe space” since the shootings occurred at Pulse Nightclub in Orlando last summer and whether it is important to preserve specifically gay or lesbian bars and meeting places.  Pulse was not only a home to gay, lesbian, and trans individuals but also to the queer Puerto Rican community. We are at an interesting moment in LGBTQ history – one in which we have seen significant political progress (towards equality and assimilation), the rise of a digital hookup culture, and simultaneous loss of gathering spaces due to gentrification, violence and the “lack of need”. I am deeply concerned that LGBTQ people are experiencing an increase in isolation and loneliness, specifically folks who still do not see themselves reflected in mainstream culture based on race, economic status, gender identification or disability. This is something I consider often in my artwork.

OHC: Do you see your work as activist? If so what social change do you seek to highlight and support?

GS: Alongside my art practice, I volunteer for a New York City based non-profit that offers donation-based mental health support for LGBTQ people. I am currently leading a support group for lesbian, bisexual and queer women who are beginning, or facing challenges with, their coming out process. I attend weekly supervision groups led by a licensed therapist, in which the volunteer counselors (myself included) present their client cases and discuss the complexities of navigating a heterosexually oriented world. I often mention this counseling work when I talk about my artmaking because I feel they are vital to one another. Explorations of identity, history, community and the seeking and making of LGBTQ culture that I engage in with my art in the studio often mirror those I have with clients and in my coming out group at Identity House. To answer your question more directly, I see my artmaking as activism in the sense that it is reliant on and in conversation with my direct involvement with the New York LGBTQ community and with mental health advocacy.

OHC: What do you hope to share with Sites of Love and Fascination?

GS: Sites of Love and Fascination is an installation piece that incorporates video projection, audio, architectural/sculptural/decorative objects with dance and gesture. The piece examines the last four lesbian bars that are still open in the five boroughs of New York (Cubbyhole, Ginger’s, Henrietta Hudson, and Bum Bum) as sites of resiliency and culture/language making and gathering. I am interested in the sort of non-linear visual history contained within these bars and the language of the bodies that occupy them. I’ll give you two examples of the décor that fascinates me. The bathroom walls at Ginger’s bar in Park Slope are completely collaged with magazine, poster and pamphlet clippings of lesbian presence in sports, the arts, politics, music and mass-media. One can scan over five decades of lesbian visibility while sitting on the toilet in that bathroom. The ceiling of the Cubbyhole Bar (in the West Village) appears lower than it is, due to thousands of ornaments stapled to the drywall. The bartenders change up the ornaments for each holiday that comes and goes but the lanterns, twinkle lights, rainbow flags, and random smattering of sea horses and colorful plastic globes remain consistent. If you take a close look you will notice all the old staples in the ceiling that once held a decoration. These bars were important for me in my own coming out process. I am interested in the relationship between these spaces as fixed meeting points and the rising popularity of nomadic party culture and dating apps.

OHC: What does collaboration with a dancer add to this work?

GS: Much of my work is concerned with the relationship between queer sites and bodies and the reciprocal impact that they may have on each other in the development of language and expression. Through times of hardship and violence, both politically and socially, dance has been both a method of celebration and mourning, release and dissent. If you think back to the ‘80s when the AIDS crisis devastated the gay community, dance and disco culture helped the community cope in a major way. Similarly, Ballroom and Vogue culture was started in the 1960s in Harlem by African American drag queens as a method of forming alternative family structures and language through extravagant expression and posture. Your work with dance, choreography, and sexual health advocacy has always inspired me in the sense that you often combine activism with visual vocabulary so seamlessly. Collaborating with you opened up my work in a huge way for which I am deeply thankful. After the Pulse shooting Alan Ruiz (who is a professor at Pratt Institute and a fantastic artist and scholar) wrote an article on disco culture for The Nation called Life After Sundown. His writing on the disco and gay bar perfectly encapsulates my own thoughts on the significance of dance and safe space: “They are spaces of becoming, where a marginalized subject might momentarily escape oppression amongst manifold communities on the dance floor.” [1]

OHC: Do you feel a level of social responsibility as an artist? If so how does that influence your creative process?

GS: Social responsibility drives my art practice. Of course, artmaking is also a way to process what is going on in the world and in my own life and a time to be alone, to play and to think through materiality and concept. The movement back out from the studio into the community is what excites me the most and what fuels my investment in my practice. I did a series of oral history interviews with lesbians and queer women for another project about lesbian bars. Sitting with these individuals and listening to their stories was one of the most interesting and energizing things for me. I love the back and forth between alone time and community engagement. I feel it is the role of the artist to ask questions and to open up space for tough dialogue.