"Middle Eastern" ≠ "Arab" - Why That Matters (and more)

In preparation for our session at Dance/NYC's annual symposium, "Words We Use to Talk About Race" (Feb 23, 2-3pm), JComm members are considering their own viewpoints surrounding race and language. In this op-ed, Nadia Khayrallah discusses the limited language and understanding surrounding Middle Eastern/Southwest Asian and North African ethnicities in the dance field.

A few years ago, I started noticing the term ALAANA (African, Latinx, Asian, Arab, and Native American) being used by various dance organizations to refer to marginalized racial groups--including on my application for Dance/NYC's Junior Committee.

As an Arab-American I was excited to see some acknowledgement, given how often we are forgotten in conversations on race in the US (unless we're bombing or being bombed). But I was just as confused and concerned that Arabs were included at the exclusion of other Middle East and North African ethnicities.

Upon sharing my concerns with others in the dance field, I learned that the distinction between "Arab" and "Middle Eastern" wasn't as commonly known as I assumed.

The Middle East/Southwest Asia and North Africa region is incredibly multicultural. It includes countries that are not predominantly Arab (Turkey, Iran), as well as many other groups with their own histories, languages, and cultures--such as Chaldeans, Kurds, Amazighs, Assyrians, Armenians, Azeris, and Mandaeans. The exact number or definition of ethnic identities has room for controversy--but the fact that there are more than one does not.

Upon close inspection, most ethnic categories are not quite historically stable as we imagine them to be, and can have as much to do with nationalist politics of the last century as they do with ancient blood ties. But the fact that a category is socially constructed does not make it less real. Social constructs are real enough to determine who gets the job, who can cross borders, who gets citizenship rights, who gets convicted, who lives and who dies.

In many cases, myths of ethno-national purity have lead to the violent erasure of minority groups through genocide or forced assimilation. By failing to acknowledge the diasporas of these groups in the US, even unintentionally, we are validating that erasure.

In recent years, organizations using the terms MENA (Middle East and North Africa) or SWANA (Southwest Asia and North Africa) have aimed to build broader communities, recognizing the region's multiculturalism, and building solidarity around our similar experiences of racialization and discrimination within the US.

Of course, pan-regional identity is not without its own challenges and controversies. "Middle East" is a term that comes from a colonial perspective (what's it East of anyway?) and many think it's time to abandon it in favor of more neutral geographic terms. (Personally, I'm not quite ready to police "Middle East" out of existence, as its alternatives have limited recognizability outside of academic and activist contexts.)

Further, some would argue that even grouping this broad stretch of geography together is simply reproducing colonial land divisions. Are we not fully acknowledging our places on the continents of Asia and Africa respectively? Is this partially rooted in our own forms of racism and colorism?

There are no simple or unproblematic answers to these questions, nor would I consider myself the most qualified person to speak on them. I'm not a pollitical scholar nor an experienced activist.

I'm just a kid who grew up with an "ambiguous" appearance and parents from Lebanon, unsure of where I fit into the roughly-segregated social scene of my suburban North Carolina school. Who didn't know how to answer a demographic form honestly, but sometimes checked "White" a little too aspirationally in the post-9-11 political climate. Who grew up in a bilingual household, but resisted becoming functionally bilingual. Who until recently, assumed this disqualified me from seeking out community around around my ethnicity. Who eventually realized that these experiences are common within my generation, and worth discussing.

The conversations on identity I've experienced within the MENA/SWANA community are immeasurably more sophisticated than what occurs in the American mainstream. Yet this gap between inter-community and mainstream understanding is by no means limited to the MENA/SWANA category.

In holding a session on "Words We Use to Talk About Race," we hope to bring some of the nuance common in community-specific discussions of race into the general discussion. To make space for personal experiences and divergences of opinion, without assigning any individual the burden of representation. To allow this complexity to inform the choice of broad organizational language, while knowing that it can never fully be encompassed by it.

At its best, terminology allows us to find communities, identify patterns of marginalization, build political alliances, and shape societal narratives. A term shouldn't mark the end of discussion, but can open doors to more productive questioning and critique.

That said, the current terminology surrounding race in the dance field is holding our conversations back rather than pushing them forward. Let’s change that.

Nadia Khayrallah is a dancer, choreographer, and writer, as well as the Communications Coordinator for Dance/NYC’s Junior Committee. She’s definitely not an expert on this stuff, but winds up explaining it a lot anyway. She welcomes your feedback, additions, and challenges. www.NadiaK.tk 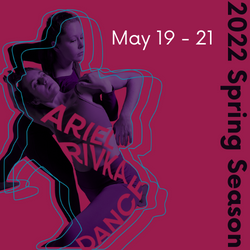